After a steady four-year climb to the #1 position, Netflix once again tops the list in 2021, solidifying its presence as the leading ‘Must Keep’ TV brand in the U.S., according to the 14th annual ‘Must Keep TV’ Report from Solutions Research Group (SRG).

ABC, CBS, Prime Video and NBC follow Netflix to round out the top 5. Amazon Prime Video moves into the #4 position, moving up from #6 last year. 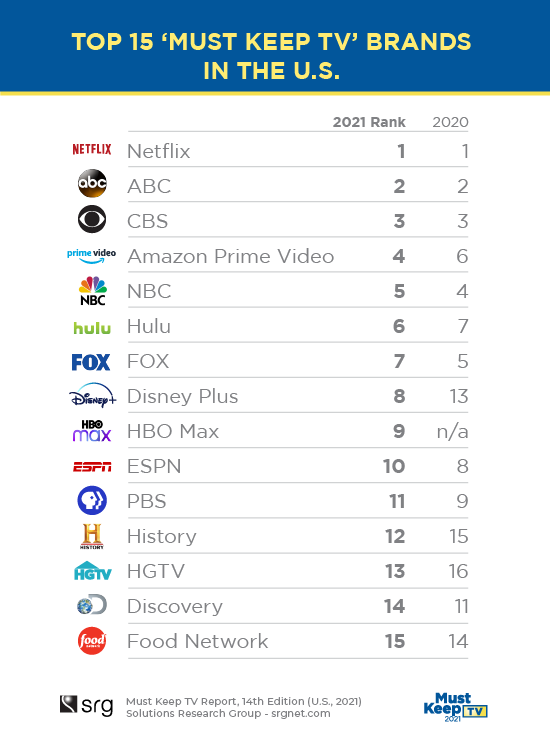 PEACOCK, APPLE TV+ AND PARAMOUNT+ ALL DEBUTED WITHIN THE TOP 40, GIVING STREAMING SERVICES A STRONG PRESENCE IN THIS YEAR’S RANKINGS

HBO Max is in the top 10 this year (#9) but preference for this new streaming option cannibalized its linear brand HBO which dropped to #25 from #12.

Netflix maintains the #1 spot for the fifth year in a row in the 18-34 young adult demo and HBO Max enters the charts at #6. Streaming services Apple TV+, Paramount+ and Peacock all debuted within the top 30 at #21, #22 and #25, respectively. 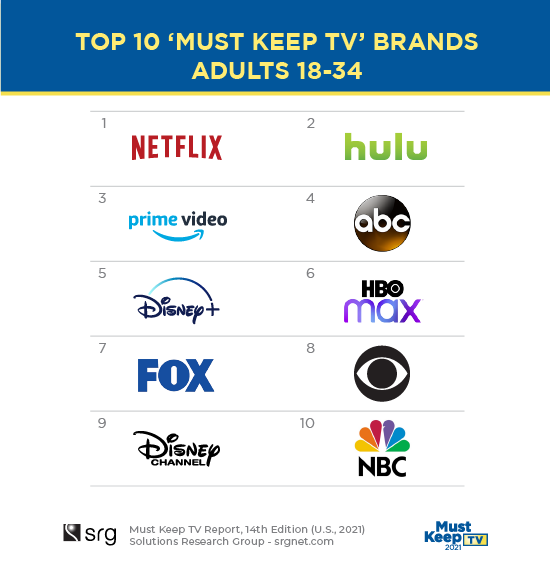 NETFLIX AND PRIME VIDEO ARE #1 AND #2 AMONG MEN 18-49; ABC IS THE LEADING BROADCAST NET WHILE ESPN REMAINS AS TOP CABLE

Netflix and Amazon Prime Video take the #1 and #2 spots followed by ABC and CBS, while Hulu moves to #5 securing a strong streamer presence for Men 18-49.

NETFLIX, PRIME VIDEO AND HULU OCCUPY THE TOP 3 SPOTS AMONG WOMEN 25-54, FOLLOWED BY ABC AND CBS

Streamers dominate the top 3 spots for Women 25-54, with Netflix ranked #1 for the third year in a row, Amazon Prime Video now at #2 and Hulu following in the #3 spot, followed by ABC and CBS.

Disney Plus now ranks #6 followed by NBC, FOX, with HBO Max debuting in the #9 spot and HGTV comes in at #10 spot, just ahead of Food Network.

For the second year in a row Netflix topped the charts for African-American audiences followed by ABC and Amazon Prime Video. CBS, NBC, CNN, ESPN, BET, FOX and Hulu round out the Top 10.

Within the Latinx audience, Netflix stays at #1 for the fourth year in a row, followed by Amazon Prime Video, followed by ABC, Hulu, CBS, Disney Plus, HBO Max, FOX, Telemundo and NBC.

Technical: ‘Must Keep TV’ is an independent syndicated brand tracking survey conducted by Solutions Research Group (SRG) among a representative sample of American consumers. This is the 14th edition of the survey since 2007. The questions have been fielded and presented in a consistent manner each year. The 2021 research is based on online interviews with 1,400 American consumers aged 12 and older and conducted in May 2021 – the sample captures and represents all major population segments. Respondents are shown a list of 83 broadcast, cable and high-penetration streaming brands and are asked to identify which ones would be on their ‘must keep TV’ list if they had to choose a limited number. Sample design is balanced by geography, gender and ethnicity, including African-American and English-speaking Latinx according to known universe parameters.