May 18, 2021 (TORONTO) – As the NHL and NBA playoffs start this spring, research shows that new Canadians will be watching. Fifty-six per cent of newcomers (56%) follow the NBA on TV or via online or social media feeds and the NBA ranks first among all newcomer groups. The National Hockey League is followed by 41 per cent of newcomers to Canada, making it the second most popular pro sports league.

That’s one of the findings from a new and wide-ranging Solutions Research Group (SRG) syndicated study of newcomers to Canada which follows similar reports SRG published in 2017 and 2019.

NBA was significantly ahead in popularity among all newcomer groups except among those from South Asian backgrounds where it was statistically tied for the top spot with the NHL.

When asked to identify their favourite pro teams from North American leagues for any sport, the NBA’s Toronto Raptors was voted as the leading sports franchise, ahead of the Toronto Maple Leafs and Toronto Blue Jays. The Raptors and the Leafs were the top two franchises for Chinese, South Asian and West Asian newcomers. Newcomers from the Philippines picked the Lakers as their second favourite team behind the Raptors.

While the Toronto Raptors were the most popular pro sports franchise overall, newcomers support their local NHL teams also. Among newcomers in Vancouver, Canucks were the top team followed by the Raptors in the second spot; in Edmonton, Oilers led with Raptors in second place, and in Calgary and Montreal, Flames and Canadiens, respectively, were just ahead of the Raptors. Raptors were #1 with a wide margin in Toronto where they received more votes than the Maple Leafs and the Jays combined. 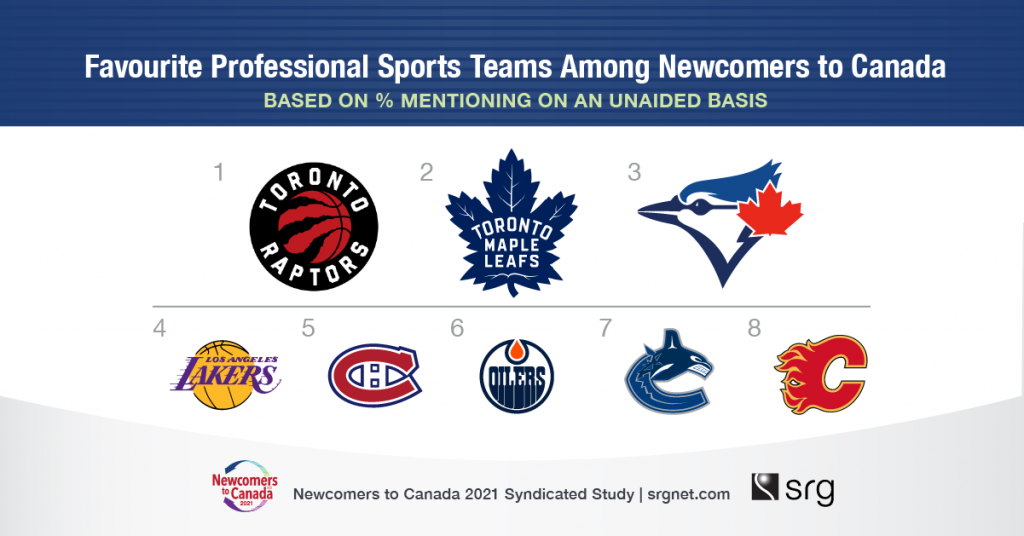 The study also included research on youth participation in sports among newcomers with children. Swimming, basketball, soccer and badminton were the top four participation sports for newcomer children, followed by hockey in fifth place. Sixteen per cent of newcomer parents (16%) said their kids participated in hockey, compared to 27% of children among the general population.

Among newcomer kids who aren’t in hockey or skating programs, it’s because 59 per cent of them didn’t know how to skate. The intent to learn was high, however, at 44 per cent.

Newcomer parents remain open to registering their children in learn to play hockey programs. Parents interviewed said that they’d be motivated if their kids themselves expressed interest in playing hockey. They also said they’d be motivated to enroll their kids if they can access programs at a lower cost or be provided incentives such as low-cost gear.

About the Study:  Newcomers to Canada is an independent syndicated research study exploring consumer behaviours, social attitudes and demographics of newcomers to Canada – SRG has undertaken previous waves of research in 2017 and 2019. The 2021 study covered newcomers from five major groups and geographic areas which account for a vast majority of immigration to Canada, as follows: South Asian backgrounds, Chinese backgrounds, Filipino newcomers, West Asian, Arab and Persian Newcomers and Latin & Central American Newcomers. To participate the respondents had to be 18 years of age and older and new to Canada, having arrived in 2015 or more recently and currently living in one of the following CMAs: Vancouver, Calgary, Edmonton, Toronto and Montreal. A total of 850 online interviews among newcomers were conducted in multiple languages in March 2021. In addition to interviews among newcomers, a total of 600 interviews were also conducted among general population respondents aged 18 and older in the same 5 markets to provide a general point of comparison for selected results. For more information, please contact robin@srgnet.com