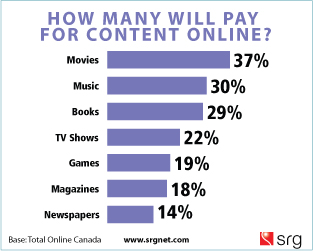 Companies looking to monetize their content with online subscription models would be advised to look for additional sources of revenue according to results from the Q3 edition of Digital Life Canada, SRG’s quarterly trend survey.

The research benchmarked consumers’ willingness to pay for various types of content online. Only 14% would pay for newspapers online; TV shows did better at 22%, and books seemed worthy of payment to 29%. Movies had the most potential, with 37% indicating willingness to pay.

Many consumers believe that they already are ‘paying’ for content and services through their Internet or mobile subscription fees and they say that the “ability to find things that are free without additional fees is one of the great things about the Internet” (77% agree).

Technical:  These findings come from SRG’s independent Digital Life Canada syndicated study.  Digital Life Canada (follow on Twitter @DigitalLifeCa)  is based on quarterly interviews with 1,000 online Canadians aged 12 and older since Q4 2006. The Q3 2009 research was conducted in October 2009.  For more information, you can contact us at info@srgnet.com