Engagement levels with Pyeongchang were also somewhat lower than Sochi – 48% said they followed the Pyeongchang games ‘very’ or ‘somewhat closely,’ compared to 56% who said the same in 2014 for Sochi. Lack of NHL star power at the Olympics this time around, a greater time zone difference, and greater competition for prime time TV coverage from OTT (over-the-top) services and others may have been contributing factors. The biggest decline was among Gen Z and Millennials – only 41% of those 12-29 said they followed the Olympics ‘very’ or ‘somewhat’closely, down from 53% in 2014 in that age group, a 12-point decline. Decline in the older (30+) age group was comparatively smaller down slightly to 50% from  56% for Sochi.

RBC was the top advertiser in unaided recall metrics for Pyeongchang, up from the #3 spot in Sochi when it was behind McDonald’s and Coca-Cola. Nearly one-in-four (24%) of those following the games mentioned RBC on an unaided basis and RBC  was followed by Coca-Cola (#2), Canadian Tire (#3), Visa (#4) and Toyota (#5). Other Canadian Olympic sponsors that made it to the top 10 list include Bell  (#6) and Petro-Canada (#10).

RBC took the top spot among both men and women. Coca-Cola and VISA were #2 and #3 respectively for men while Canadian Tire and Toyota rounded out the top 3 among women. 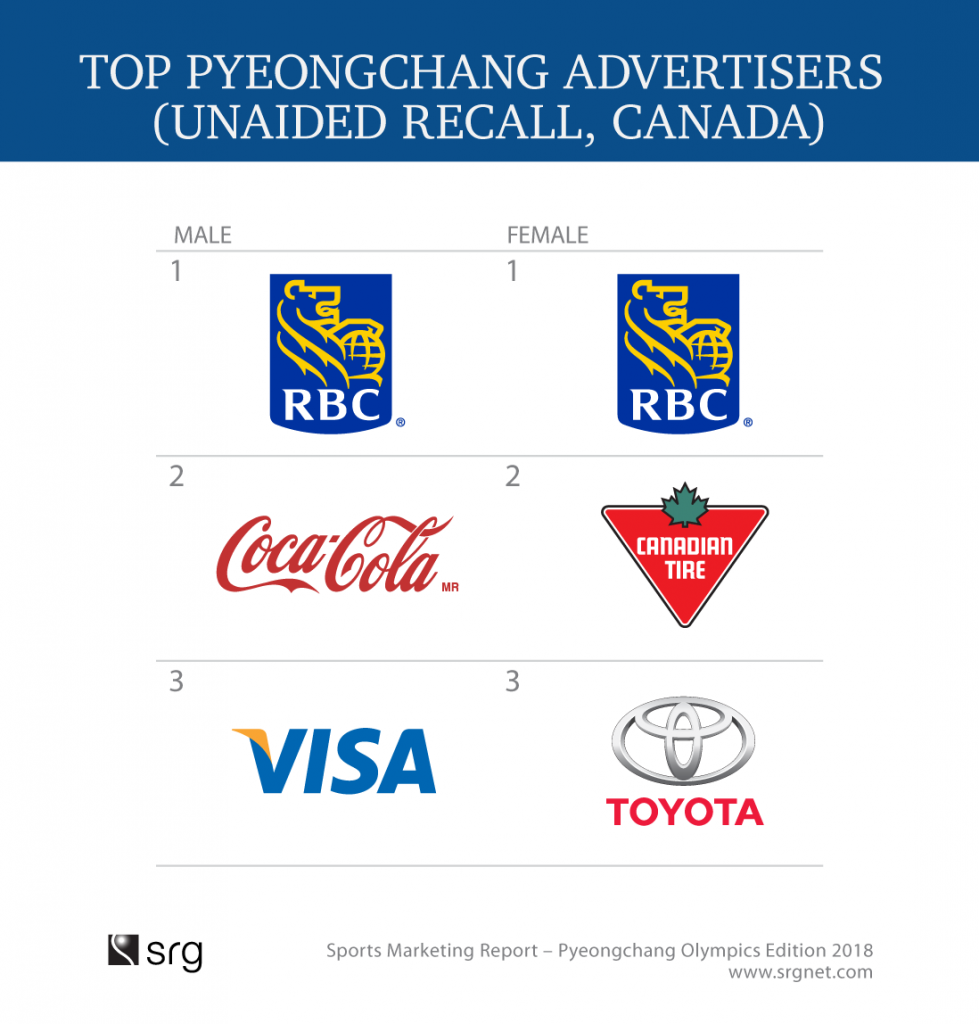 Among other notable findings of the research:

Technical: SRG’s Sports Marketing Report – Pyeongchang Olympics Edition is based on interviews with 1,000 Canadians conducted in late February nationally. Respondents who followed the Pyeongchang Olympics very or somewhat closely were asked which sponsors/advertisers they noticed on TV, online or mobile for each on an unprompted, unaided basis. The responses were used to determine the unaided recall rankings. Sports Marketing Report consists of a series of independent syndicated research studies providing an objective and comparative perspective on sports event audiences and sponsors’ return on investment for sports events (e.g., Olympics, Pan Am Games, FIFA Soccer) and properties (NHL, NBA, etc.). For more information on the report, please contact Robin Dryburgh robin@srgnet.com