When it comes to TV channels American consumers say they absolutely must have, ABC, CBS, NBC and FOX (in that order) are still the four heavyweights as ‘must keep’ TV brands, according to the 8th edition of the annual syndicated brand tracking survey, Must Keep TV, from Solutions Research Group.

The big brands among the cable channels – ESPN and Discovery – follow close behind at the #5 and #6 position overall, with HBO, home of the hugely popular Game of Thrones, coming in at #7, its best showing since in 8 years, followed by History and PBS. Rounding out the top 10, and moving up seven spots from last year is AMC (home of three big cable hits in Breaking Bad, The Walking Dead and Mad Men). 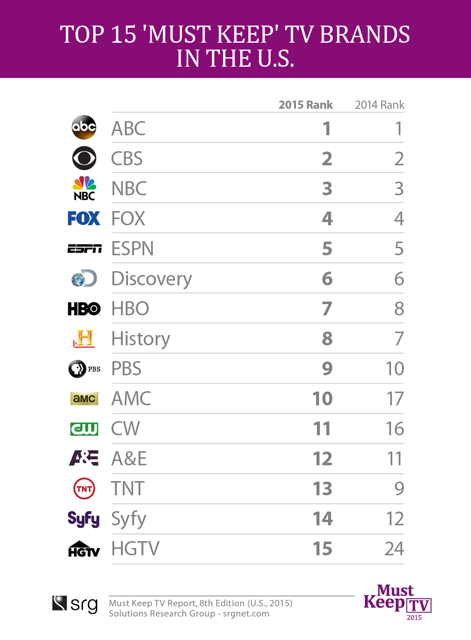 AMC has risen in popularity across all age groups and also was the top brand over a 5-year period, up an impressive 36 spots from #46 in the 2011 research to #10 in 2015. Other big momentum brands over this longer period were CW, FX, HGTV and PBS. 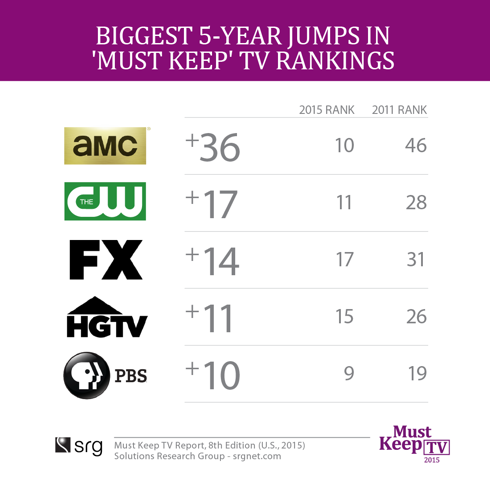 Among other highlights of the study…

The top ten channels in terms of fan loyalty as indicated by proportion who would drop their TV subscription in the event of non-carriage are as follows: Telemundo, Univision, NBC Sports Network, FOX News Channel, Bravo, History, ESPN, AMC, ESPN2 and FOX Sports 1.

Technical: ‘Must Keep TV’ tracking is an independent syndicated brand tracking survey conducted by Solutions Research Group (SRG) among a representative sample of American consumers. This is the 8th edition of the survey since 2007. The questions have been fielded and presented in the same manner each year. The 2015 research is based on online interviews with 1,400 American consumers 12+ conducted in April 2015 – the sample captures and represents all major population segments.

Respondents are shown a list of 74 leading network/cable brands and are asked to identify which ones would be on their ‘must keep TV’ list if they had to choose a limited number. Sample design is balanced by geography, gender and ethnicity, including African-American and English-speaking Hispanics according to known universe parameters. For more information, contact robin@srgnet.com