ABC, CBS, FOX and NBC continue their grip on the top four positions on the list of top 10 TV brands that American consumers consider “Must Keep TV.”  It’s a close race for #1 with ABC posting just a slight lead over CBS overall in 2013.

ESPN is once again the top cable brand for American viewers and holds the number five spot overall for the fifth year in a row. There has been some shifting in the ranks with History moving up to sixth place, eclipsing seventh place Discovery for the first time as the top non-sports cable brand since 2007. HBO has rejoined the top 10 after two years outside the top echelon. That leaves USA and PBS to round out the top 10 in SRG’s latest “Must Keep TV” report.

The sixth edition of the independent tracking survey is based on interviews with 1,400 American consumers aged 12-plus in Spring 2013. Their evaluations of 74 selected network and cable brands reveal which brands consumers must have, the ones gaining in popularity and those that are slipping. 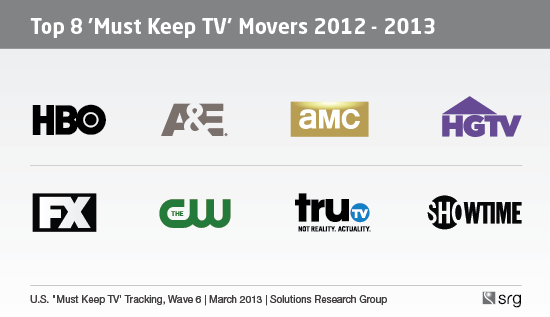 Notable highlights of the 2013 research include:

While the big four are ranked at the top of the brand lists for the sixth year in a row, the proportion of Americans who would include at least one of the big four networks on their ‘must keep’ list was only 75% this year. While this is still a big number, it’s down 8-points from a peak of 83% when we first started tracking in 2007.

Technical: ‘Must Keep TV’ tracking is an independent syndicated brand tracking survey conducted by Solutions Research Group (SRG) among a representative sample of American consumers. This is the 6th edition of the survey since 2007. The 2013 research is based on online interviews with 1,400 American consumers 12+ conducted in March 2013 – the sample captures and represents all major population segments. Respondents are shown a list of 74 network/cable brands and are asked to identify which ones would be on their ‘must keep TV’ list if they had to choose a limited number. Sample design is balanced by geography, gender and ethnicity, including African-American and English-speaking Hispanics according to known universe parameters. For more information, contact rwalton@srgnet.com